FROM FOLK TO BAROQUE

In an era of genre-mining and the short sound byte, it is indeed adventurous for Nadina Mackie Jackson and folksinger Valdy to blend Folk and Baroque, and to serve it on a score of be-bop and swing. A joyfully energetic and musically virtuosic show, featuring beloved Valdy hits like “Rock n’ Roll Song” and “Dreams About You”, music written by Karel Roessingh and for Nadina, pop, jazz, tango, Leonard Cohen and a toe-tapping, crowd rousing Vivaldi concerto. Joined by pianist and composer, Karel Roessingh, Valdy and Nadina share their stories with skill and humour. Together, they create an evening of musical wizardry that warms the heart and soul.

Valdy has sold almost half a million copies of his 13 albums, has two Juno Awards (Folk Singer of the Year and Folk Entertainer of the Year), a total of seven Juno nominations and four Gold albums to his credit. His recent CDs include “Contenders”, a collaboration with friend and fellow singer/songwriter, Gary Fjellgaard, and a solo release, “Viva Valdy: Live at Last”, a two-CD package, one live, one studio, with a total of 25 tunes.

One of Canada’s most influential songwriters, Valdy’s composition A Good Song was recorded under the title Just a Man by the venerable Quincy Jones (he sang lead on the recording!). Rock and Roll Song has been recorded by a few artists, including John Kay of Steppenwolf. Along the way, Valdy has taken his music to a dozen different countries, from Denmark to Australia and been an often-invited performer at the prestigious Kerrville Festival in Texas. He has appeared on television and remains a mainstay on radio networks around the globe.

One of the world’s leading bassoonists, Nadina Mackie Jackson is not afraid to explore the boundaries of performance. From unaccompanied baroque to newly commissioned concerti, her performances often reach far beyond traditional concert settings for bassoon.

Recording worldwide on both modern and historical bassoons, her performances are remembered for their “effortless musicality and integrity, making the bassoon sound like a human voice” (National Post). Nadina has performed as soloist with orchestras, at chamber music festivals, and in recitals.

Let this Canadian folk hero and the blue-haired priestess of the bassoon, share with your audiences as they weave their musical paths into a truly unique celebration of musical genres and a true tapestry of musical styles.

“As presenters we had high expectations. We are confident audience members did as well, since many at the show identified themselves as long-time Valdy fans. The evening exceeded our highest expectations.”
John Barth, Lake District Arts Council

“What I particularly loved was the reaching across the traditional (and so unfortunate) divide that separates musicians rooted in different genres and the obvious delight you all experience making music together.”
Richard Hoenich, conductor and former principal bassoon, Orchestre symphonique de Montréal

“Together with pianist Karel Roessingh, Valdy & Nadina created an evening of musical wizardry that warms the heart and soul. This is one of those concerts you don’t want to miss. Run – don’t walk – to get your tickets to Valdy and Nadina Mackie Jackson”.
Bulkley Valley Concert Association [October 23, 2014]

Canadian folk hero, Valdy, and that blue-haired priestess of the bassoon, Nadina Mackie Jackson, weave their musical paths into a tapestry of seamlessly responsive musical styles, from folk to baroque, rock to pop and coloured by a warmth of friendship that embraces the audience in its happy glow. Joined by jazz pianist Karel Roessingh and bassist Joe Phillips, and drawing from the Valdy songbook, jazz and classical works, including Vivaldi and Rimsky Korsakov, their concerts are a delight to audiences of all ages and backgrounds. 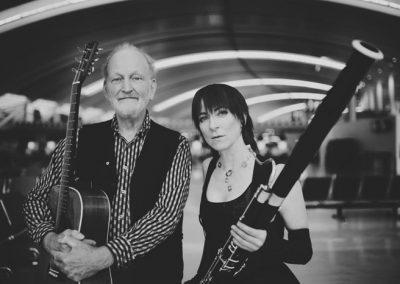 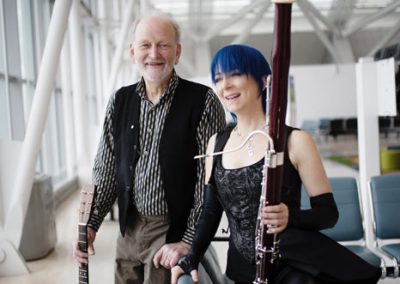 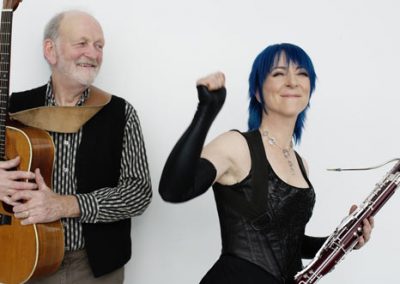 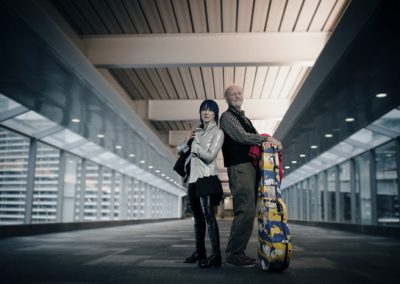 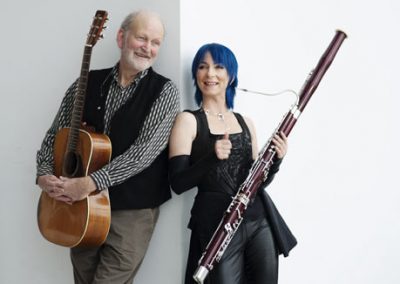 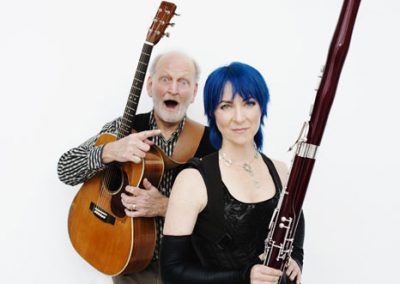